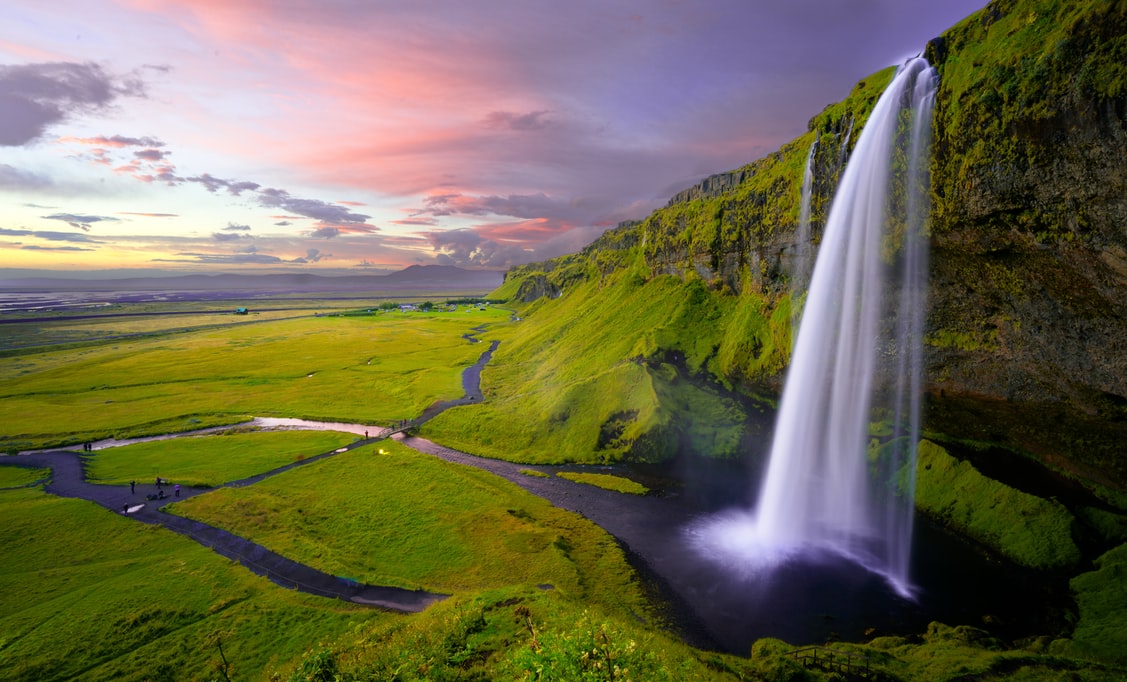 Home to formidable glaciers and more than 30,000 live volcanoes, Iceland truly is the land of ice and fire. One of the youngest landmasses on the planet, this volcanic island lies some 900 km (560 miles) west of Norway and features close to 5000 km (3100 miles) of coastline. Almost 80% of Iceland remains uninhabited, and its topography projects a distinctly prehistoric feel, dotted with geysers, black sand beaches, mineral-streaked mountain peaks, and steaming lava fields. With underwater sites no less dramatic than its mainland, diving in Iceland offers some incredibly unique opportunities for those comfortable with dry suit diving and water temperatures that hover around 2oC (36oF). Due to the entire island being formed by massive tectonic activity, the resulting ruptures, filled with astoundingly clear glacial water, serve up some pretty unforgettable diving experiences like those found at the hugely popular Silfra Fissure.

Two hours east of Iceland’s capital Reykjavik, Silfra is just one of many fissures fed by the melt waters of the island’s second-largest glacier, Langjokull, but it’s easily the most spectacular of the group. Made up of four distinct sections (the Big Crack, the Hall, the Cathedral, and the Lagoon), and reaching 60 meters (195 feet) at its deepest point, Silfra, or “Silver Lady”, is touted as one of the world’s top dive sites for a couple of very good reasons. The Silfra Fissure is actually a crack between the North American and Eurasian continents and, as such, is the only place in the world where you can dive or snorkel directly in the break between two continental plates. There are even locations where divers can touch both continents at the same time. The glacial water filling the fissure is filtered through porous underground lava for 30-100 years before it reaches the north end of Thingvellir Lake, and seeps out from its underground wells. The result is water so unbelievably pristine that you can actually drink it during your dive. Underwater visibility in the Silfra Fissure is over 100 meters (328 feet), creating a subaquatic experience that can only be described as surreal.

Threshold To The Arctic Circle

Iceland lies at the juncture of the North Atlantic and Arctic Oceans, but generally enjoys a relatively mild climate just the same, with annual temperatures ranging from about minus 3o to plus 14oC (27-57oF). While its coastal sea surface temperatures hold steady at around 2°C (36oF) during the coldest months from January through March, they can rise to over 10°C (50oF) at the south- and west coasts of the island during the summer, and to slightly over 8°C (46oF) at the north coast. Summer sea temperatures are generally coolest along the east coast of the island, where they remain below 8°C (46oF). During those years with heavy sea ice off northern Iceland, however, water temperatures during the summer have been known to cling stubbornly to their more winter-like norms.

Iceland’s Keflavik International Airport is the island’s main transportation hub, while Reykjavik International Airport handles most of the country’s domestic flights. With a permanent population of only about 330,000, Iceland has become quite popular as a tourist destination in recent years, but still manages to maintain its rather wild and secluded appeal. Although its official language is Icelandic, English is widely spoken and understood, and the island’s glaciers, lagoons, waterfalls, and hot springs provide the ideal framework for visitors to enjoy hiking, ice climbing, caving, and cycling. Many of the island’s more popular tours and outings, including Puffin cruises and Icelandic Horse trail rides, don’t generally operate during the winter months, so your local Icelandic Kronas would be better spent on organized land activities during the warmer season. Scuba diving packages in Iceland, on the other hand, are available all year round, and dive sites tend to be a little calmer and less populated during the winter months.

Where Adventure Runs Hot And Cold

From wrecks to hot springs, there’s far more to diving vacations in Iceland than the venerable Silfra Fissure. At the very east end of the island, divers can explore the British oil tanker, “El Grillo”, sunk in a fjord in 1944 by WWII German fighter planes. The ship lies at a depth of about 45 meters (148 feet), is 150 meters (490 feet) long, and has had all of its oil pumped out, making it a rather amazing dive site. Other popular sites include Strýtan, the underwater hot springs of Lake Kleifarvatn, and the heated river Litlaá, all of which offer fantastic diving prospects surrounded by geothermal activity. Strytan is located in the north of Iceland, and features a 55 meter (180 foot) tall limestone chimney, rising up from the floor of the longest fjord in the country. A hot spring at this site, at a depth of about 70 meters (230 feet), has been releasing mineral-rich water into the ocean for the past 11,000 years. This has resulted in the chimney that continues to leak freshwater, heated to a temperature of about 22oC (72oF), to this day. Divers here are sure to appreciate the extra warmth while they explore the unique flora and fauna sponsored by this unusual geothermal feature.