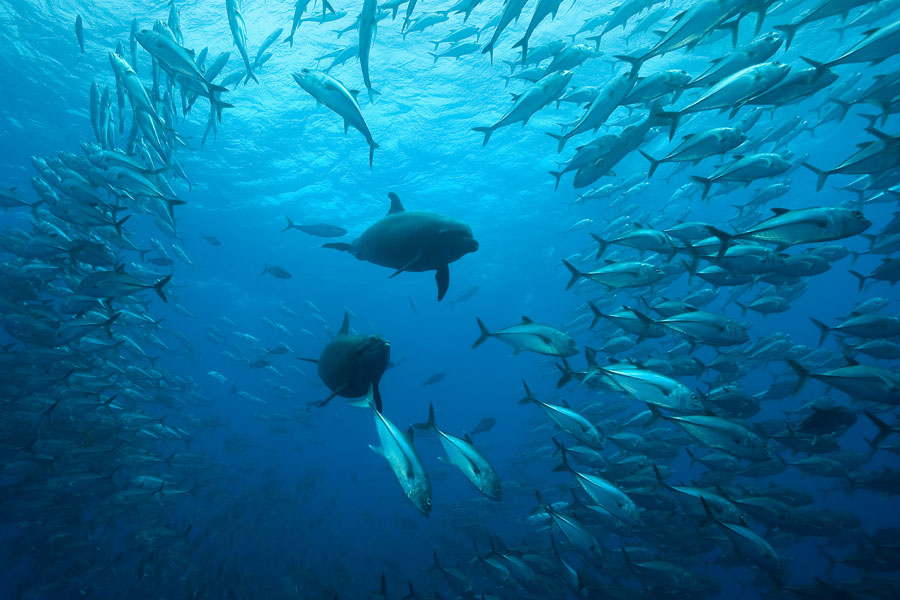 An eco-tourism haven, Costa Rica has much to offer for the adventurous traveler: From volcanoes to jungles, river rafting and hiking. Diving is done off the Pacific Coast and reef sharks, manta rays, hammerheads are just a few examples of the unpredictable, big marine life you will see.

While not as well-known as other diving locations, Costa Rica is gaining notoriety as a diving destination worth a visit due to the diversity of this small country. Costa Rica is best known for its beauty, eco-friendly environment, gorgeous waters, tropical weather, and the amazing surroundings. Divers and nature lovers come from all points of the globe to Costa Rica to view the wildlife, lush surroundings, and underwater world. While Costa Rica is a small country, it contains 4% of all species that live on earth.

Best Time of The Year For Diving In Costa Rica

Diving in Costa Rica is enjoyable and warm year-round so you can dive comfortably any time. May to November is the rainy season, but also the warmest time of the year and tends to have better visibility. Diving from December to April will give you more of an opportunity to enjoy the manta rays that call Costa Rica home.

How To Get To Costa Rica

Costa Rica is located between Nicaragua and Panama in the southern part of Central America and is easy to get to whether you fly or drive. From most anywhere in the United States you can get in your car and drive to Costa Rica if you are into road trips. Most people prefer to fly and non-stop flight times to San Jose Costa Rica average: 6 hours from Los Angeles, 3 hours from Miami, and 8 hours from New York as an example. Most liveaboards depart from Puntarenas located 70kms (43 miles) from San Jose airport with bus or shuttle transfers available.

As the number one “green” country in the world, Costa Rica makes saving its natural resources a priority. This, as well as having a diverse and lavish marine life, makes for good diving conditions and nice visibility.

While there are some wrecks that you can dive, and a few caves, Costa Rica is best known for large manta rays, hammerheads, white tip sharks, whale sharks, and fish which vary in size from minute to immense pelagic. You can also expect to see turtles, dolphins and almost 60 different kinds of crustaceans. The only coral reef is in the eastern portion of Costa Rica and while an earthquake caused some damage to it, divers can still find 35 species of coral, 140 species of mollusks and over 120 species of fish, and this is just a small sampling of diving in Costa Rica.

While you can shore dive in certain areas, the best way to scuba dive in Costa Rica is by liveaboard and several liveaboard outfits make weekly trips. A bonus to diving from a liveaboard is that it has easier access to more remote locations with better visibility than shore diving. There are also dive resorts in Costa Rica that offer Costa Rica Scuba diving packages, making it much easier to plan a Costa Rica diving vacation with discounts, itineraries and guided dives on the day diving boats.

Where to Dive in Costa Rica

There are many locations to go diving in Costa Rica. The more well known areas include:

A special treat is a liveaboard trip to remote Cocos Island. A unique sanctuary 500 km off the coast of Costa Rica, Cocos Island is probably the best-known dive site around Costa Rica. Declared by UNESCO to be a World Heritage Site, it teems with a wide variety of marine life, but the main attraction here are the Hammerhead Sharks which are always concentrated together in the area and can number in the hundreds.

Cano Island — second in notoriety only to Cocos Island, Cano Island is a mere 12 km off the shore of Costa Rica. Keep an eye out for the humpback whales and playful dolphins while making your way to the Island. Explore the underwater caves and magnificent corals on the 15-foot reefs, while diving beside moray eels, stingrays, dolphins and even a shark or two. In addition, the Bajo Del Diablo offers a formation of underwater mountains.

Paraiso — located 8 km southeast of the town of Cartago, which is almost in the dead center of Costa Rica, Paraiso is the place to see Blue Stripe Snappers, parrotfish and puffers. While it is always a good idea to keep your eyes on the barracuda, take comfort in the fact that they are more interested in the horse-eyed jacks in residence.

Gulf of Papagayo — located near the Liberia International Airport, and home to a number of resorts, there are approximately twenty different sites to dive. Colonies of Rocky Coral provide the backdrop for the white tip shark, southern rays, eagle rays, eagle tiger moray, sea urchins, and octopus, which call the area home.

While Costa Rica offers diving as one of its main attractions, there are other things to do as well. There are areas that offer kayaking, canoeing, white water rafting, parasailing, and whale and dolphin watching. In addition, land friendly activities include mountain biking, bungee jumping, zip lines, horseback riding, hot air ballooning and golf.

True nature lovers cannot miss a canopy tour. Costa Rica is world renowned for its Ecotourism and the Canopy tour highlights Costa Rica’s unique ecosystem. It is best viewed and enjoyed from above the canopy of the trees, which holds the richest diversity of life in Costa Rica. With a panoramic view from above, visitors can enjoy views of volcanoes, the ocean, mountain ranges, and the incredible wildlife nestled in the trees such as toucans and monkeys. The tours can be taken on a zip line or you can choose to traverse by using the suspension bridges.

Uninhabited, lush, wild, beautiful and untouched this island paradise is located 275 miles southeast of Costa Rica.  Accessible only by liveaboard dive boat, the rocky pinnacles surrounding Cocos Island are beacons for big animals and big action.  Divers visiting the region are treated to a hike through the pristine jungle and a swim under one of the slands many waterfalls.

Cocos Island presents the same diving challenges as any other Pacific, Indian or Red Sea diving location. Cocos, however, is not recommended for inexperienced divers because it is an open ocean destination that requires advanced open water diving skills. Most dives are at depths deeper than 60 feet/18 meters. At Cocos, currents and visibility can be entirely different in just a few hours.

A world Heritage Site, the island has only two bays with safe anchorages and sandy beaches: Chatham is located on the northeast side and Wafer Bay is on the northwest. Just off Cocos are a series of smaller basaltic rocks and islets.

Among Cocos Island’s many attributes is a startling degree of biodiversity. This Island’s world-renowned waters explode with life, including innumerable white tip reef sharks, schooling hammerhead sharks, dolphins, mantas and marbled rays, giant moray eels, sailfish, and of course the occasional whale shark. Other common encounters are large schools of jacks and tuna, silky sharks, silver tip sharks, marlin, Creole fish, green turtles and octopus.Cocos Island is also home to at least 27 endemic fish species including the exotic rosy-lipped batfish. The island is also home to some 25 species of moss, and 85 species of fungus. There are upwards of 87 bird species, including the famous Cocos Island cuckoo, finch and flycatcher. There are 362 species of insects, of which 64 are endemic. Two native reptiles are found only on the Island.

Beneath the waterfalls and in the rivers, are freshwater fish that mystify scientists by their very existence. Because of its remote location and abundance of fresh water, Cocos has, throughout history, been a favorite re-supply station for pirates, whalers and sailors.

Early visitors left pigs on the island as a self-perpetuating source of fresh meat. To this day feral pigs and deer abound. 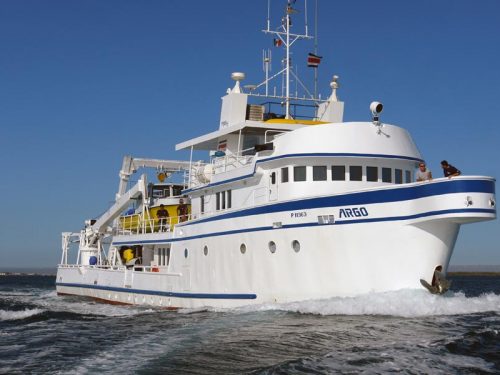 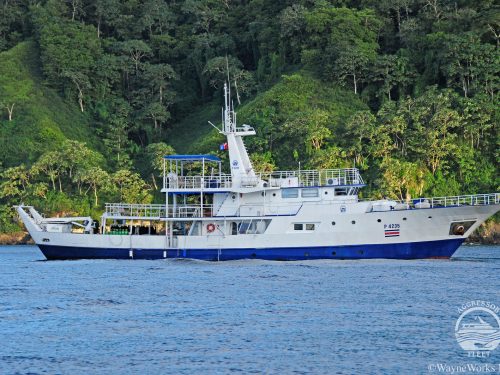 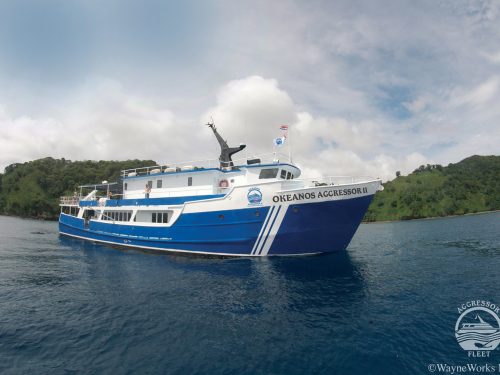 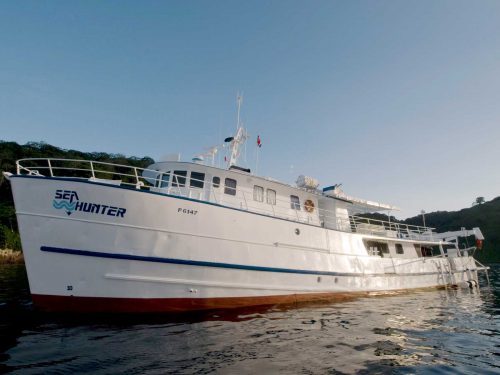