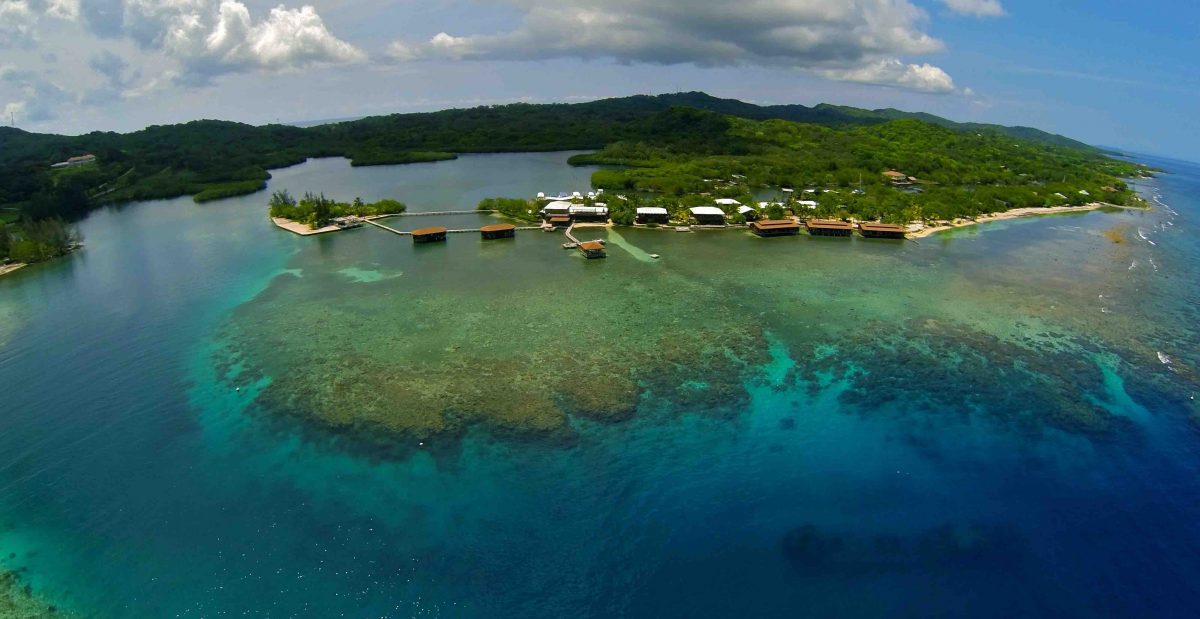 With a wide range of wrecks, walls, caverns, and drop-offs to explore, scuba diving packages in Honduras bring experienced adventurers, and new divers alike face-to-face with more than 300 species of rainbow-coloured fish, and the region’s celebrated whalesharks. Nestled in the elbow of Central America, and all but enclosed on three sides by Guatemala, El Salvador, and Nicaragua, Honduras features gloriously unspoiled reefs in the clear waters off its northern coast. In this lovely stretch of the Caribbean Sea, the local Bay Islands offer hundreds of premium dive sites, serviced by an ever-growing number of resorts and liveaboards. Reefs around the main islands of Roatan and Utila, as well as Guanaja, are among the healthiest in the vicinity, making diving vacations in Honduras a must-do in this up and coming hotspot for snorkelers and scuba divers of all levels.

It’s Easy To Dive In Honduras

In addition to the multitude of boat options and dive resorts in Honduras, the islands of Roatan and Utila are a shore-diver’s paradise, and snorkeling and easy dive site access abounds. With a variety of shallow dives, wrecks, and walls suitable for beginners, and with PADI scuba diving courses both plentiful and relatively inexpensive, Honduras is one of the best locations in the world to learn to dive. Meanwhile, more seasoned divers will find it impossible to resist the lure of the many drop-offs, caverns and swim-throughs that are offered by sites like Spooky Channel, on the island of Roatan. Here you can watch the natural light slowly recede , while you penetrate and explore the pillared swim-throughs of this 10-story deep, underwater crevasse.

The Heat Is On

Honduras is a hot and humid jungle environment, and with typical water visibility of 25-30 meters (80-100 feet), scuba diving in the Bay Islands is attractive all year. The average temperature of both air and water hovers around 30oC (85oF), so be prepared to leave your heavy clothing at home and just keep a 3.5mm shorty wetsuit on standby. With the best time of year for encountering the area’s renowned whalesharks stretching from February through May, enthusiastic divers will be delighted to find that these months escape both the country’s rainy period, from October through February, and its main hurricane season spanning September through November.

Scuba divers and snorkeling enthusiasts aren’t the only visitors to Honduras who’ll find themselves awed by local, natural gems like parrotfish, dolphins, moray eels, and horse eye jacks. With its lush rainforests, majestic cloud forests, and vast interior plateau of hills and mountains, Honduras is blessed with a rich tapestry of birds and wildlife, and a wide range of outdoor activities that will help you make the most of the magnificent outdoors. Explore the mystery of ancient Mayan ruins, whitewater raft down the Rio  Cangrejal, or hike endless trails in the vast national parks that toucans, howler monkeys, jaguars and sloths call home. On your off-days, you can simply stretch out one of the many white, sandy beaches and make plans for your next adventure.

As the largest and most populated of the Bay Islands, with 65,000 residents, Roatan is the site of hundreds of dive locations, two recompression chambers, and one of the largest barrier reefs in the world. Dive resorts are plentiful, and the best sites are just a short boat ride away. Outstanding shore dives can also be found at various locations around the island, particularly along its south side. Jutting out from the southern coastline, Cara a Cara Point’s proximity to deep waters makes it a favourite site for viewing the Caribbean reef shark, and barracuda and parrotfish will keep you company when you descend to explore the interior of the sunken Odyssey off Roatan’s northern shore. Punctuated by an enormous crack in the reef, up to 4 meters (12 feet) wide in spots, Mary’s Place is one of the most spectacular and popular sites on the island. Here, sunlight streams through the giant crevice in varying intensities, alternately enhancing and dimming the mood and colour of the surrounding reef. Less experienced divers will find lots of sites where they, too, can enjoy the diversity of marine life, including the west end’s apt ly-named Turtle Crossing.

Utila may be the smallest of Honduras’ three main Bay Islands, with a mere 3,000 residents, but it’s the best place to find the region’s whalesharks where they congregate around the banks off the north end. With close to 60 moored dive sites, Utila really does offer something for everyone. New divers will appreciate the opportunity to explore the coral spur and groove formations along the island’s southern shoreline, while even the most experienced diver will become intoxicated by the drop-offs found at the northern end’s Turtle Harbour. Here, where the continental shelf and the island of Utila meet, the reefs at popular sites like Duppy Waters sprout enormous barrel sponges, and hawksbill turtles, eagle rays, and moray eels dot the vertical landscape of these magnificent drops into the deep. More seasoned divers will also enjoy the challenge of the south end’s Black Hills site, where you can drop down over the edge of an underwater mountain, some 10 meters (35 feet) below the surface, and work your way back along its colourful corals in the company of lionfish and creole wrasses.

Least known of the Bay Islands, the less tourist-filled Guanaja is a mere 12km (8 miles) from Roatan. Delightful accommodations like the Villa on Dunbar Rock and Cabanas on Clark’s Cay can make this island a more serene option for exploring the local marine life. Guanaja’s fringing reef is a protected marine reserve—an ideal spot for diving and snorkeling. The 50+ dive sites feature pinnacles, vertical walls, lava tunnels, and wrecks. The sites ring the island, making it possible to dive at a location in the lee of the wind in nearly all conditions. Whereas Utila lays claim to the giant whale sharks, Guanaja ‘s claim to fame is its abundant and varied macro life and lush, vibrant reefs. Guanaja also has its own compression chamber, which was opened in 2016 after receiving a grant from DAN and a generous contribution from the owner of Dunbar Rock

Easy To Go, Hard Not To Stay

Getting to Honduras is easy from just about anywhere with three international airports on the mainland, including Toncontin International Airport in the capital city of Tegucigalpa, and direct flights to the island of Roatan itself. Located only about 50km (30 miles) offshore, visitors to Honduras have easy access to the Bay Islands, with both connecting flights and local ferry services as convenient transit options. Although Spanish is the official language of the country’s 8.5 million residents, English is widely spoken everywhere, and both the US dollar and the local Honduran Lempira (HNL) are accepted as currency throughout the islands. Roatan and Utila are by far the most popular islands for scuba diving in Honduras, but the less tourist-filled Guanaja is a mere 12km (8 miles) from Roatan, and great to consider. 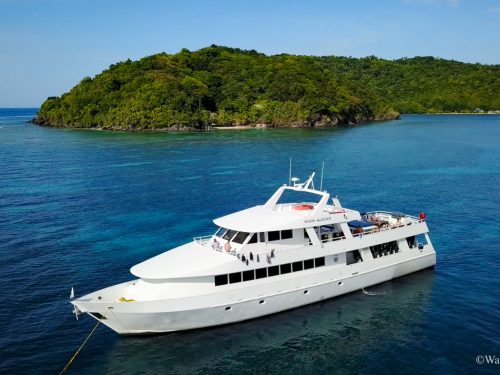 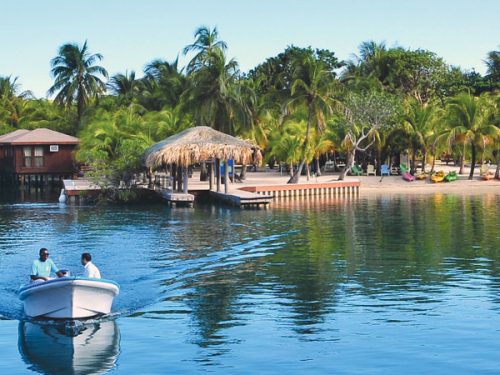 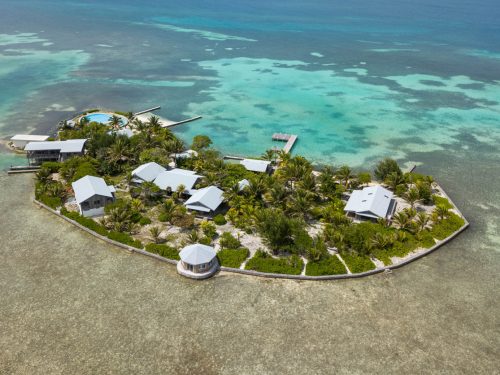 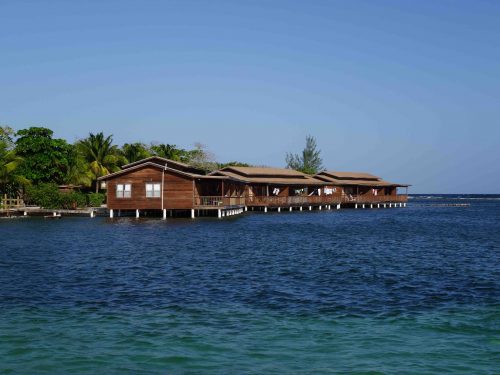 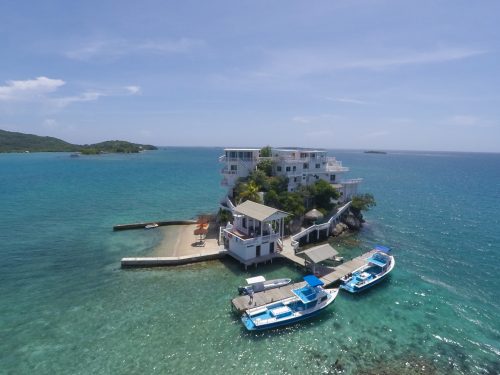 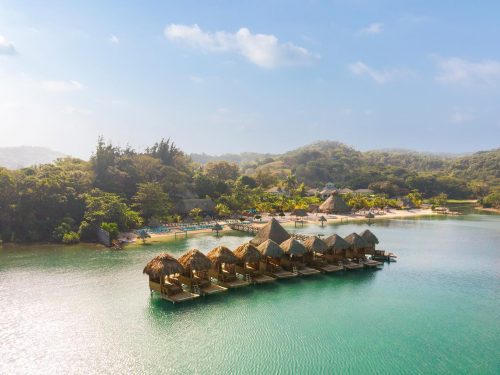