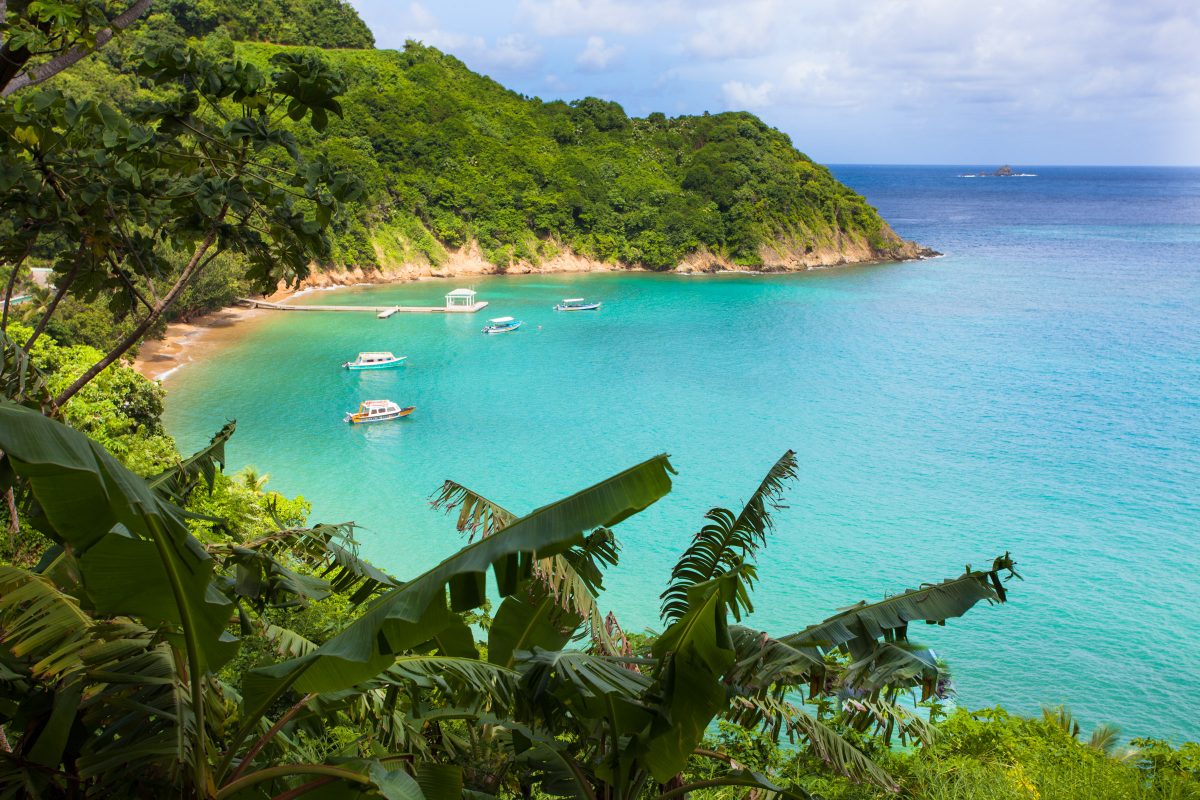 Have you heard of Tobago? Could you place it on a map? If not, you’re missing out. Tobago is one of the best scuba diving destinations in the Caribbean.

Incredibly diverse above and below the surface, this tiny island is ripe for exploration. Divers will delight in the shallow reefs, current-filled outcrops and the sheer variety of marine life, including everything from tiny octopus to manta rays and bull sharks.

To learn more about Tobago diving and perhaps even get inspired to book your own Tobagodive vacation, read on and enjoy our scuba diving guide to this verdant destination.

Tobago is one half of the Caribbean island nation known as Trinidad and Tobago. These islands are actually the southernmost bits of land found in the Caribbean Sea.

Trinidad and Tobago are located about 81 miles (130 kilometres) south of Grenada and just 6.8 miles (11 kilometres) off the coast of Venezuela. The country also shares maritime borders with St. Vincent and the Grenadines to the northwest and Guyana to the southeast. In addition, the islands are bordered by both the Atlantic Ocean and the Caribbean Sea.

Thanks to several determining factors, Tobago is a world-class scuba diving destination. On its windward side, the Atlantic ocean sweeps nutrient-rich currents around the island, including the Guyana Current. On the other side of the island, the Caribbean Sea keeps things warm and pleasant. Plus, Venezuela’s Orinoco River dumps “super water” nearby.

Together, these three water sources create an incredibly diverse environment in which everything from macro species to pelagic giants thrives. In particular, most species you see on the island’s fringing reefs are about twice their normal size. This is because of all the nutrients floating around in the clear waters, and it makes for fascinating dives. You can even see the largest recorded brain coral in the world around Tobago!

In addition, most of the 40+ dive sites around Tobago are easy reef dives with minimal current. These sites are home to turtles, eels, groupers and more than 300 other species of marine life. On the other hand, the island’s position also affords it a few more current-heavy sites. Reserved for advanced divers, these sites occasionally produce sightings of mantas, tiger sharks and schooling hammerheads.

Diving around Tobago is laid back and (for the most part) easy. Shore diving and boat diving are both common, although most operators prefer to take divers around the island by boat. Beginners and those on refresher dives are most likely to enjoy a shore dive or two.

Many of the reefs are quite shallow and protected from strong currents, making Tobago an excellent choice for beginners or those just learning to dive. However, advanced divers won’t be bored on the island. Further afield, raging currents and depths reaching 100 feet (30 meters) require experience. But the hard work usually pays off with big animal sightings. Keep in mind, many of the really advanced sites usually require a supplemental fee.

Diver’s Thirst – One of the most popular advanced dive sites around Tobago, Diver’s Thirst requires the right set of conditions to reach by boat and successfully dive. On a good day, this drift will take you past large schools of fish, turtles, nurse sharks, eagle rays and even manta rays. Bigger sharks are occasionally seen.

Diver’s Dream – Prone to current, this dive site boasts beautiful gorgonian corals as well as barrel sponges reaching up to 6 feet (1.8 meters) tall. Reef sharks and eagle rays frequent this site and lucky divers might even spot a tiger or bull sharks here.

Kariwak Reef – Great for kids and people doing a Discover Scuba Diving course, this reef is just off Store Bay. The site is quite shallow and normally without current yet is home to colorful fish and other marine critters, like octopus and eels. Kariwak Reef is also great for night diving.

Mount Irvine Wall – A fun dive close to shore, this “wall” boasts many crevices harbouring crabs, seahorses and reef fish. Eagle rays and turtles are also seen in and around this site. Mount Irvine Wall is often combined with the deeper site known as the Extension, where large tarpon makes their home in the sheltering coral reef.

MV Maverick – This former car ferry was intentionally sunk off Rocky Point in 1997. Today, it’s home to stunning corals and schooling fish. The top of the boat sits at an achievable 50 feet (15 meters), while the bottom lies at 100 feet (30 meters).

Flying Reef – A fun drift dive at a relatively shallow depth, this dive site is known for its large plate coral colonies and huge sponges. Reef fish inhabit the area as do both electric rays and stingrays. This is a great dive for anyone who has never done drift diving previously but wants to give it a try.

The Sisters – Off Englishman’s Bay, the Sisters are actually five-rock pinnacles that attract schooling hammerhead sharks in the winter (although numbers are rapidly dwindling). You might also spot turtles, mantas and all kinds of schooling fish here.

Kelleston Drain – This dive site is famous for having the largest recorded brain coral in the world, measuring 16 feet (5 meters) across. It’s also home to nurse sharks and plentiful soft corals.

Tobago was once ranked as the best snorkelling spot in the Caribbean by USA Today. Thanks to a fringing reef system, many of the best snorkelling spots around the island are accessible from shore. These include reefs off Englishman’s Bay, Pirate’s Bay, Castara Bay, Arnos Vale and Store Bay. Operators around the island also offer boat trips for snorkelling to destinations like Buccoo Reef, Angel Reef near Goat Island and Lover’s Bay.

From white sand beaches to lush, inland jungles, Tobago is a nature lover’s playground above the surface. For most visitors, hiking and bird watching as well as exploring the island’s history and culture compliment days spent lying on some of the best beaches in the world.

A few of the main hiking areas include the Main Ridge Rainforest, the Gilford Trace trail and Argyle Falls. Birdwatchers will want to check out the Adventure Farm and Nature Reserve to look for hummingbirds.

If you need a short break from nature, Fort King George, Fort James and Fort Milford offer an education in the tumultuous history of the islands.

Beach lovers should note that Tobago is home to stunning stretches of white sand. Beaches on the island can be split into three categories: those along the windward coast, those along the Caribbean coast and those in the southwest part of the island. The latter two categories offer idyllic conditions for beachgoers, while the windward coast is home to more remote and therefore harder to reach yet equally beautiful beaches. Around the island, tourist favourites include King’s Bay, Pirates Bay, StoneHaven Bay and Pigeon Point Heritage Park.

Because Trinidad and Tobago are located outside the main Caribbean hurricane belt, the diving season around the islands is year-round. With that said, visibility can be lower during the rainy season from July to December due to runoff from Venezuela’s Orinoco River.

How To Get There

Your international flight will arrive in Port of Spain, Trinidad’s Piarco International Airport. 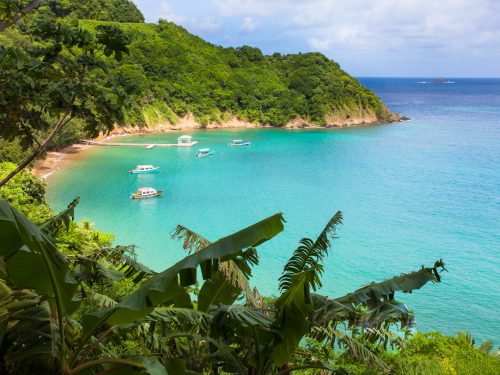