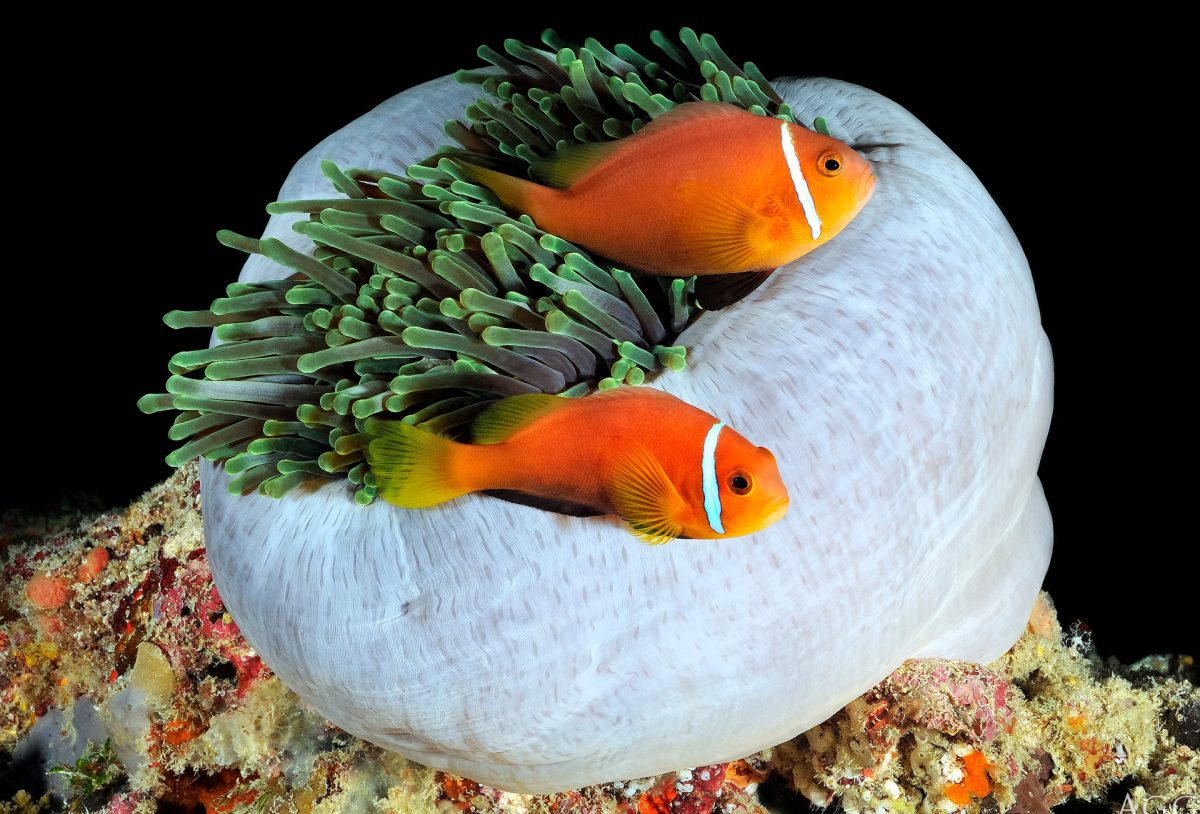 The Maldives Islands lie Southwest of India – like a string of pearls scattered across the Equator over the deep blue Indian Ocean.

The first glimpse you get of this fascinating atoll formation confirms two unique aspects of the Republic of Maldives: Not only does it consist of the most beautiful tropical islands, but 99% of its 90.000 km² is covered by the sea. 1190 islands are spread over 26 atolls, ringlike coral formations enclosing a lagoon, which gives the Maldives its unique paradise-like appearance. They stretch for about 820 km from North to South, 130 km at the widest point and do not exceed a length of 4.5 miles. No more than 200 islands are inhabited, 87 are exclusive tourist resorts.

The capital Malé, the seat of government and the centre of trade, commerce, business, health and education, is located in the middle of the atoll chain, a small island buzzing with the sounds and activities of about 75.000 people which is about one third of the population.

Palm fringed islands with sparkling white beaches, turquoise lagoons, clear warm waters and coral reefs teeming with abundant varieties of marine flora and fauna, fascinates visitors as it has for thousands of years. The climate is generally warm and humid. Sun shines all year through. Average temperature is around 29 – 32 degrees Celsius. Being in the monsoon belt of the Indian Ocean, the Maldives experience quite a complex weather pattern although the temperature remains fairly constant.

There are two seasons in the Maldives: a dry northeast monsoon and a wet southwest monsoon. From May to November the prevailing winds are from the southwest and bring an average of 215mm of rainfall and 208 hours of sunshine per month. Around mid December the winds veer to the northeast and, with the change in direction, bring a much drier climate. Rainfall averages 75mm (3in) per month in this season, the average monthly sunshine is 256 hours. Average water temperature is 84F/29° celsius. Every season has its advantages. While the months February, March and April are popular for their clear visibility, other months are favored because of the high amount of plankton in the water – which increases the chance of encountering sea giants like mantas and whale sharks.

The atolls of the Maldives are formed from coral structures, separated by lagoons. The atolls are in fact part of a greater structure known as the Laccadives-Chagos Ridge, which stretches over 2000 kilometres. The islands are low lying with the highest point at approximately 8 feet above sea level. ‘Faru’ or ring-shaped reef structures form the atolls and these reefs provide natural defense against wind and wave action, on these delicate islands.

The Maldives are famed for its rare underwater beauty. The profusion of psychedelic colours and the abundance and variety of life underwater have fascinated divers and snorkellers since Maldives was discovered as a diving destination. The highest level of visibility that one could expect- sometimes exceeding 50 metres – and warm temperatures throughout the year makes diving in the Maldives a delight you would want to experience over and over again. All resorts in the Maldives have professional dive schools with multi-lingual instructors and conduct courses for beginners as well as the advanced. Many of the resorts have excellent house reefs. Just a short swim from the beach and snorkellers too can experience the same pleasures from the surface.

There are three distinctly different types of diving: inside the atolls, outside the atolls and inside the channels or passes, which is where the currents are strongest and you’ll find the greatest congregation of fish life. Most intriguing are the cleaning stations, found around every corner and under every ledge. Groupers, Snappers, Surgeonfish, Eels, Parrotfish, even Giant Napoleon Wrasse park casually in corners, oblivious to all, (including cameras) while armies of wrasse, shrimp and other assorted cleaners pick at debris in their open gills and cavernous mouths.

The big attraction, however, are the schools of fish that patrol the reefs in colorful packs: Humpback and Black and White Snappers, Trevally Jacks, Barracuda, Batfish, Unicornfish, Yellowback Fusiliers and Harlequin Sweetlips almost comical in design. The reef’s larger inhabitants, including sharks, rays and occasionally even Whale Sharks, are often seen cruising in the blue.

To experience the best of diving in the Maldives, you need to move with the seasons and the currents. Diving from a liveaboard vessel allows this and gives you the optimum chance of seeing thrilling animals such as sharks and manta rays. 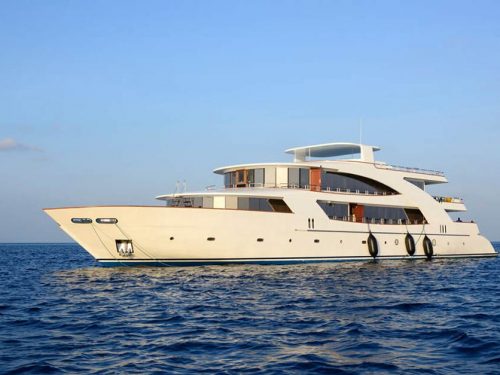 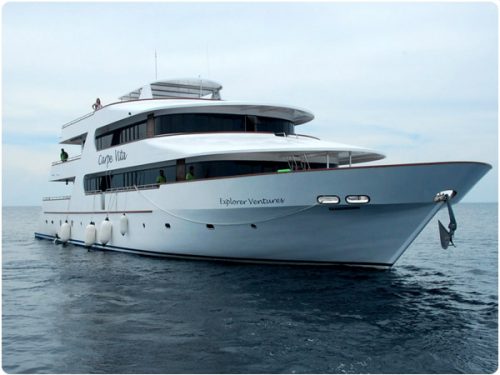 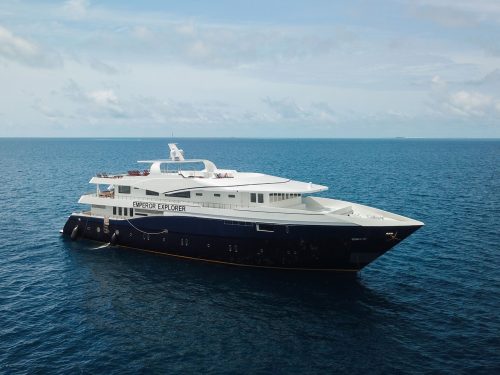 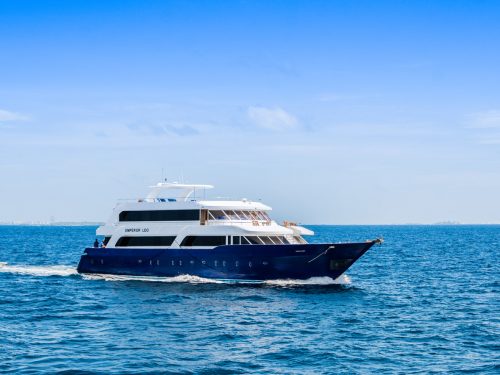 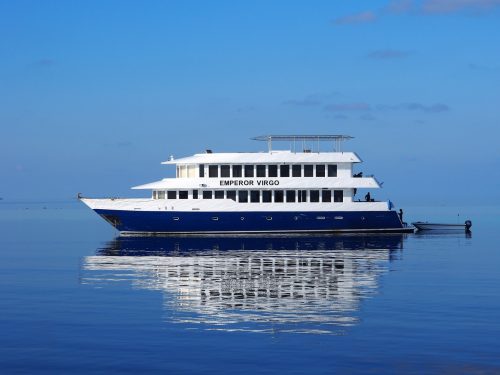 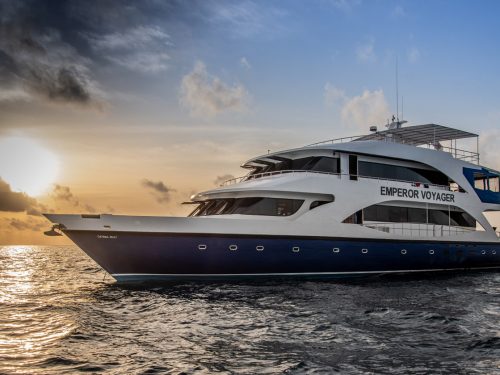 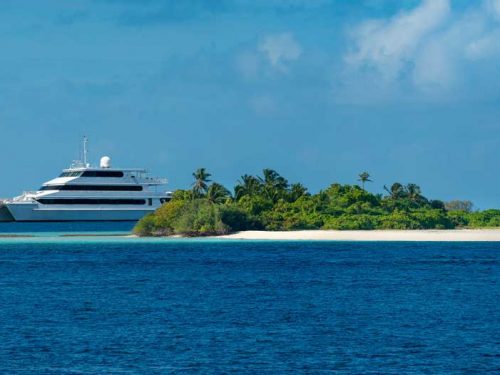 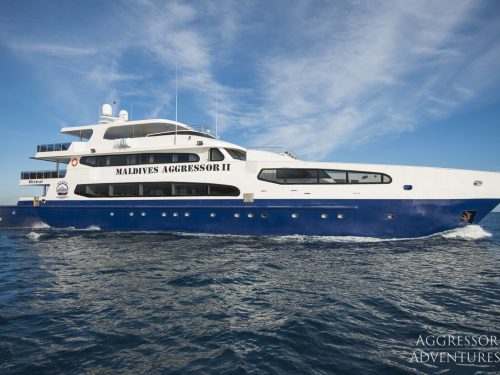 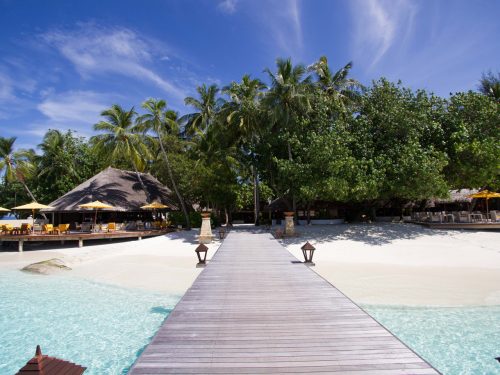 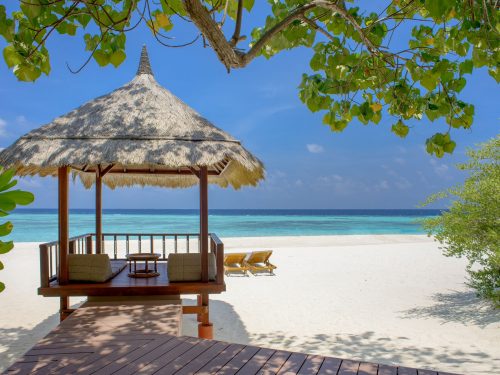 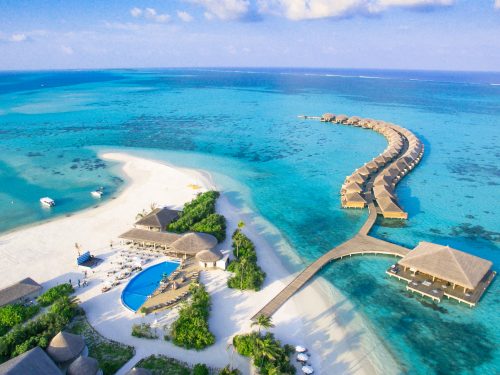 You & Me by Cocoon