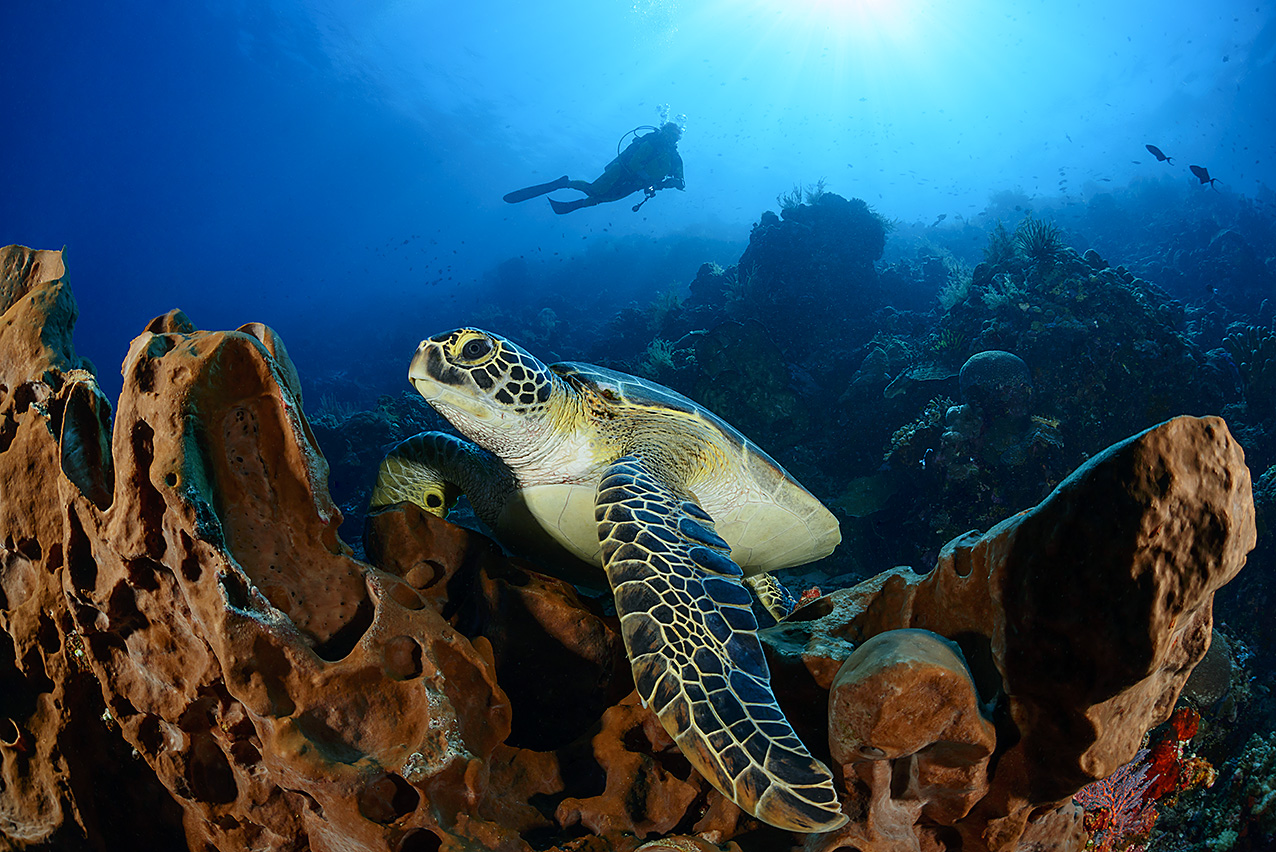 Facts About Sea Turtles & How You Can Help

Turtles are truly a delight to see swimming in the clear blue open water. As they clumsily chew on the coral reef or slowly float along the current, as divers, we have ample opportunity to observe these shelled creatures in their true habitat. Unfortunately, all 7 species of sea turtles are endangered due to antiquated fishing techniques, lack of knowledge and development along the shoreline. Educated yourself on the different species and how you can help protect these beautiful sea creatures on your next trip to Cozumel, Mexico.

The Loggerhead Sea Turtle is most commonly spotted in North America, distinguished by their hard carapace that is longer than it is wide. You’ll also notice that a loggerhead has five or more pairs of costal scutes along its back. Although only listed as endangered in the United States, populations in Mexico, Honduras, Bahamas, Cuba, Greece and Japan have seen significant declines. Did you know that baby turtles are adorable? Well if you want to see some baby loggerheads, you’ll need to head to Masirah Island, Oman or Florida’s Atlantic coast where tens of thousands loggerhead turtles nest each year. It’s an amazing sight to see! 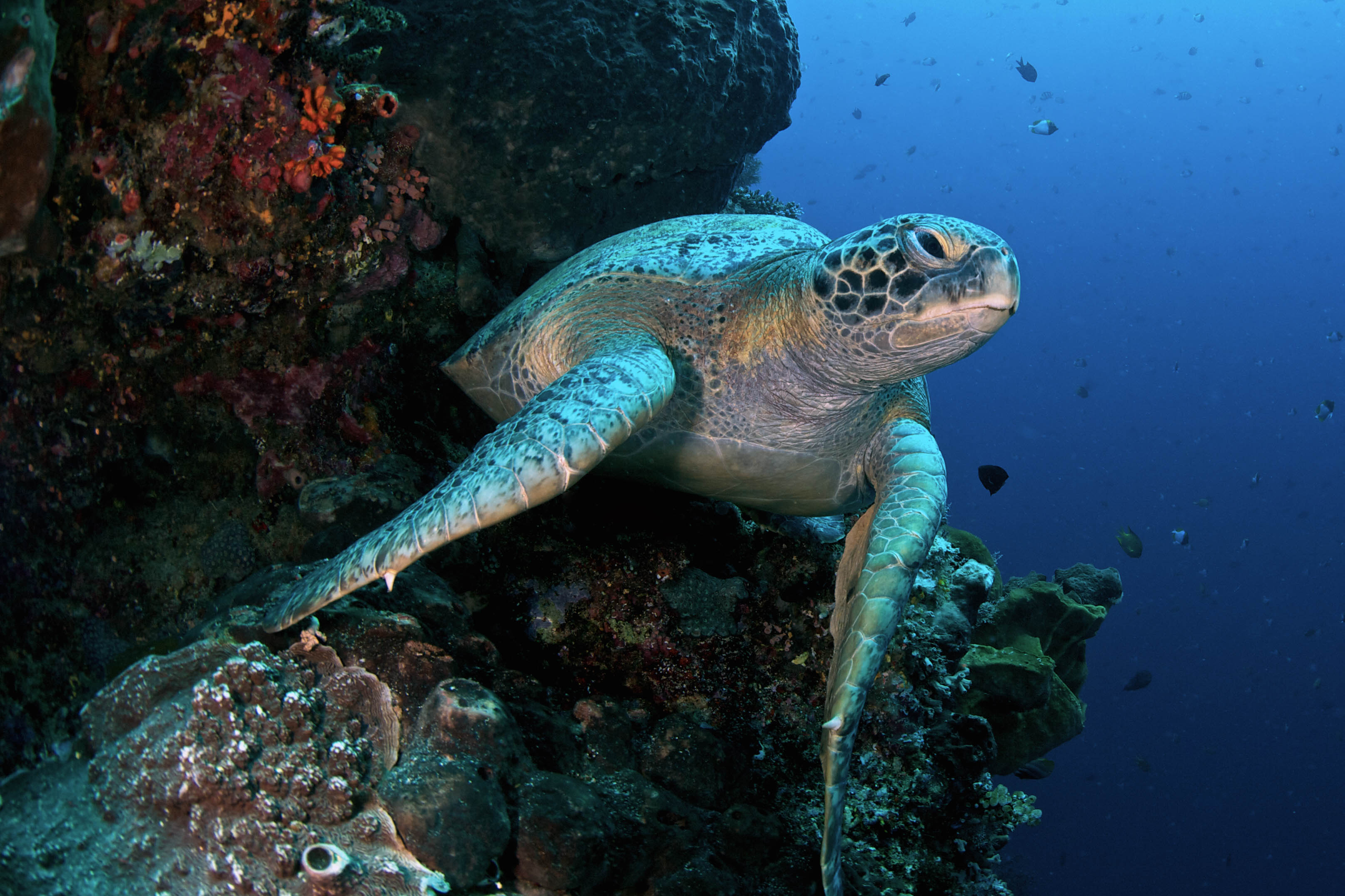 Endangered worldwide, the Green Sea Turtle was named for the fat under its shell, which is distinctly green in color. This species is the only sea turtle that is strictly a herbivore, and one that can hold their breath longer than any other sea turtle species. Did you know that they can stay underwater for up to three hours?!  The largest nesting site for green sea turtles is in Tortuguero, Costa Rica, but other nesting sites can also be found in Florida and Suriname. In addition, green sea turtles can be commonly seen while diving in parts of Southeast Asia, including Indonesia and the Philippines.

The Leatherback Sea Turtle holds all the superlatives among sea turtles. Heres why; it’s the largest known species, it can dive the deepest, and it travels the farthest. If you weren’t already aware, the leatherback was named for the layer of thin, leather-like skin that stretches across its shell, and it’s the only sea turtle species that presents a soft shell. Unfortunately, the leatherback sea turtle is endangered worldwide with populations currently declining at a rapid pace. This is particularly true along the Pacific coast of Mexico and Costa Rica, and population levels in Malaysia represent just 1% of the population in the 1950s. On the other hand, one highlight is that there has been a recent increase in nesting by leatherback females along the Florida coast. Fingers crossed that this species begins to repopulate!

The hawksbill sea turtle is clearly named for its hawk-like beak that appears at the end of its narrow head. This is one of the smaller species of sea turtles. It’s typically found in estuaries, lagoons and coastal reefs where climates are warmer. While hawksbill turtles are found in North America and the Caribbean, they are endangered and predicting sightings is incredibly difficult. The only known stable populations of this species are in the Red Sea, Oman, Yemen and northeastern Australia.

Similar to the Olive Ridley Sea Turtle, the Kemp’s Ridley Sea Turtle is the most endangered sea turtle species. This is due to the fact that the only known nesting site of this sea turtle species is along a small strip of beach in Rancho Nuevo, Mexico. These turtles enjoy a mass nesting event called ‘arribadas’ during which thousands of females come ashore at the same time. However, there were 42,000 nests created in 1942. In 2004, only 7,100 nests were reportedly found.

The most abundant of the sea turtle species, the Olive Ridley Sea Turtle population includes approximately 800,000 nesting females. This turtle was specifically named for its olive green shell and is generally found in estuaries and offshore surface waters. These unique creatures can dive to 150 meters to feed, requiring them to venture further offshore than many other species that stay close by. If you’re looking for their nesting populations, you’ll find them in Playa Nancite, Costa Rica, La Escobilla, Oaxaca and Gahirmatha, India. 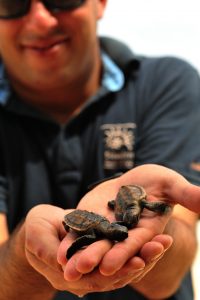 The Flatback Sea Turtle is found exclusively on the Australian continental shelf and is named for its flat back (go figure), which is usually significantly less domed in shape than other sea turtle species. These medium-sized turtles generally inhabit grassy shallows or coastal coral reefs along the northern coast of Australia and around Papua New Guinea. These kinds of turtles are a threat to the population because of the smooth, waxy shell that makes the back more easily damaged than other species.

Four of the world’s turtle species, namely the hawksbill, olive ridley, green and loggerhead sea turtles, nest on the Yucatan Peninsula and Cozumel. For years, these turtles have fallen prey to dangerous fishing practices, the souvenir trade and the locals’ culinary habits.

Thankfully, several environmental organizations have recently joined together in the area to protect sea turtles. These organizations maintain surveillance programs, conduct research and develop breeding programs. It’s organizations like these that are making an impact on saving species like these.

As a visitor to Cozumel, you can help too. How do you ask? Many of these organizations welcome volunteers, accept donations and run education programs. At Fly and Sea Dive Adventures, we can help you get involved by coordinating with the local Department of Ecology. Alternatively, you can chat with the local dive shops about sea turtle conservation programs after you land in Mexico.

Nesting season occurs from May to September, and hatchlings are released from July to November. So if you’re interested in making a difference to the world’s sea turtle populations, those are the best months to visit and do your part.