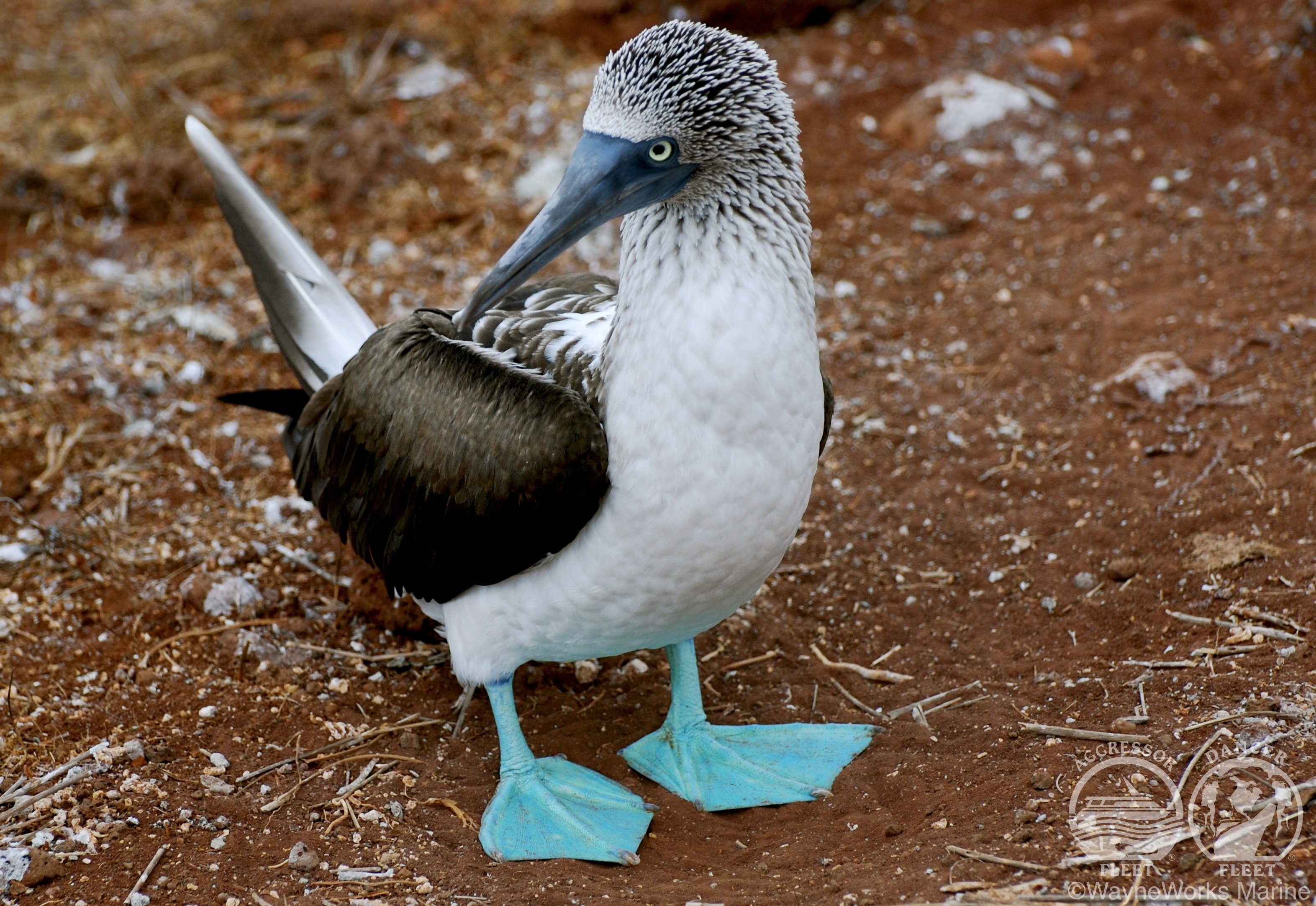 Approximately 600 miles off the coast of Ecuador lie the Galapagos Islands, a land of unimaginable biodiversity. Imagine standing on the edge of a rocky island, looking out at the wild Pacific Ocean. Surrounding you are vast numbers of endemic species waiting to be discovered by you both above and below the water. Some of these animals have become quintessential to a Galapagos dive holiday. Below we introduce the 9 most unique ÊGalapagos Islands animals. 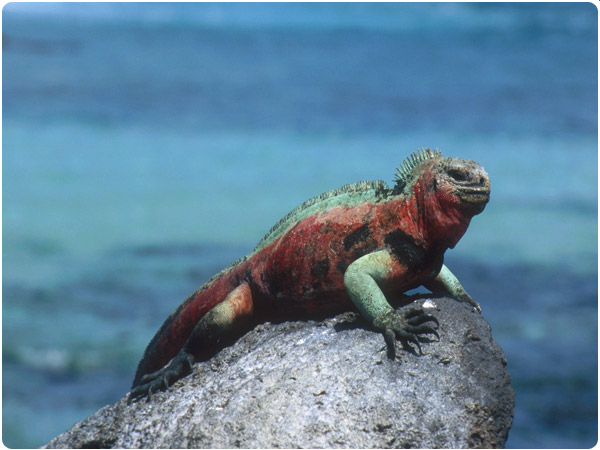 A true icon of the Galapagos Islands, the Marine Iguana is found on almost all of the islands of the archipelago. ÊAlthough their appearance may be brutish, they are gentle herbivores specially adapted for shallow shore foraging. ÊThey can be found in large numbers along most of the island’s rocky shores basking in the sun when they aren’t in the water.

Although the Sally Lightfoot Crab can be found throughout the Pacific Coast of the Americas, these rainbow-colored crustaceans display a unique behavior in the Galapagos Islands. Here you’ll see them living in symbiosis with the Marine Iguanas by using their pincers to clean ticks from the skin of the lizards.

Here’s another strange creature of the deep in the Galapagos Islands. The Red-lipped Batfish is a distant cousin of the frogfish family. As might be surmised, the endemic batfish has distinctive red lips. This 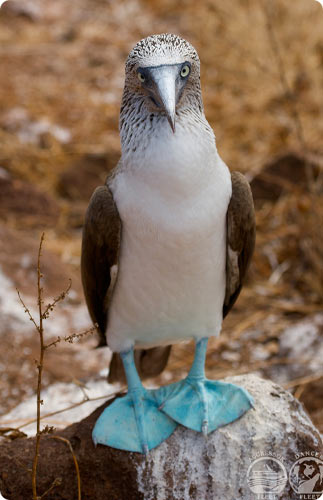 species is particularly active at night when it hunts for crabs and mollusks. You’ll find it “walking” along sandy bottoms from 3 to 76 meters throughout the archipelago.

With their namesake bright blue feet, Blue-footed Boobies are an unmistakable bird. ÊThe Galapagos Islands are an important breeding ground for these birds and during the mating season the males can often be seen strutting in front of their potential female counterparts. ÊWhen not on land, these birds are highly capable divers whether from flight or the water’s surface. Be sure to look up when diving nearby land for these and other underwater hunters.

Found only on the Galapagos Islands, the Galapagos Penguin is the second smallest species of penguin and the most northerly found. Primarily located on Fernandina Island and the western coast of Isabela Island, some may also be encountered on other small surrounding islands. The Galapagos Islands animals’ inventory is quite unique Ê- where else can you see seals, penguins and crabs in one place?

The largest bird of the Galapagos Islands and the only albatross species to be found entirely in the tropics, the Waved Albatross is a fan favorite. While this awkward bird flies great distances past the islands, it breeds only in the Galapagos. Fascinatingly, the Waved Albatross mates for life. An albatross couple performs adorable breeding rituals that include rubbing beaks with each other in a clumsy kiss-like gesture. There’s no love like albatross love! 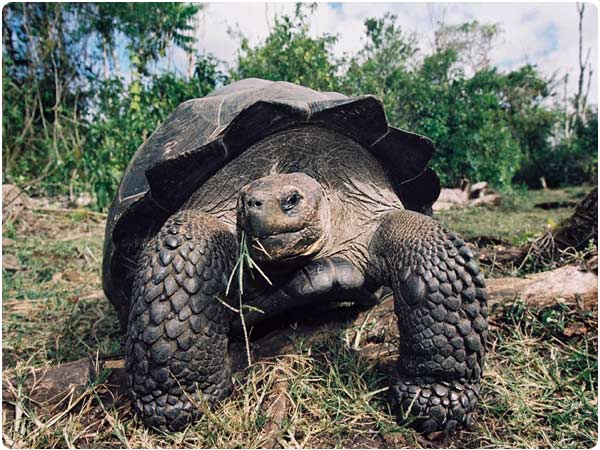 The Giant Tortoise is the largest living tortoise in the world, and the Galapagos hosts one of the two last remaining population of these vertebrates. To add to its mysticism, the Giant Tortoise can live more than 170 years! Unfortunately, their docile demeanor has made them susceptible to human predators, and today only 15,000 individuals exist in the wild.

Slightly smaller than their Californian counterparts, the Galapagos Sea Lions are often the first marine mammal tourists encounter in the archipelago. These playful creatures are not endemic, but do breed exclusively on the Galapagos. Their loud barks welcome you to these Equatorial waters. 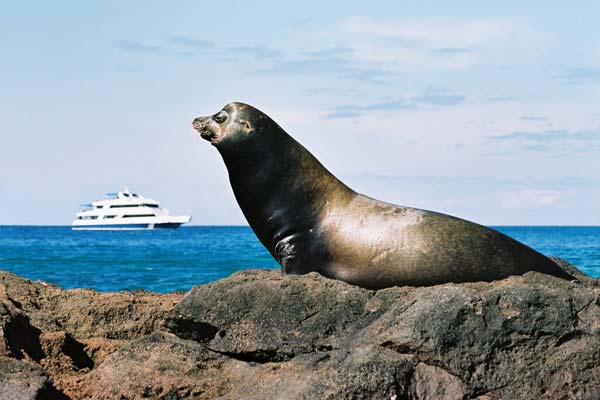 A common sight to all visitors, the Galapagos Fur Seals are a cute yet noisy reminder that you’re in one of the most biodiverse archipelagos in the world. This endemic mammal is the smallest “eared” seal in the world, and spends up to 70% of its life on land. If you’re lucky enough to see one under the water, you’re sure to fall in love with these playful animals.

While the list above features the most unique animals likely to be seen in the Galapagos Islands, there are several other endemic marine animals. These include the Galapagos Bullhead Shark, Galapagos garden eels, White Salema Grunt and Galapagos Grunt, White-spotted Rock Sea Bass and several species of nudibranchs.

Of course, many divers enjoy amazing encounters with non-unique animals as well. Of these, diving with schools of Scalloped Hammerhead Sharks is a highlight of many dive trips. Whale sharks, Galapagos sharks, silky sharks, manta rays and eagle rays are regularly seen throughout the archipelago. Whether it’s an animal endemic to the Galapagos Islands or a rare encounter with a world-wide species, you’re sure to remember the wildlife of this biodiverse land for years to come.

If you are ready to take the plunge and book your dive holiday to the Galapagos, feel free to send us an email or give us a call. We’d be happy to help you book the adventure of a lifetime!

Click here for more information on scuba diving in the Galapagos Islands.