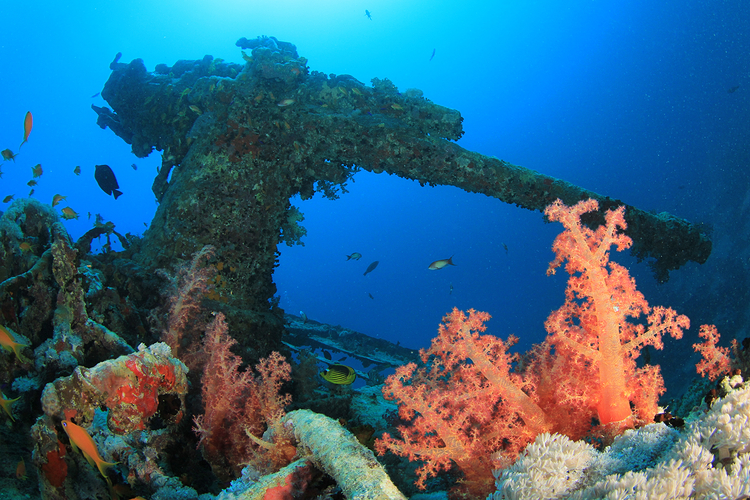 Considered one of the best wreck dive sites in the world, the SS Thistlegorm is a British Merchant Navy ship that now lies at the bottom of Egypt’s the Red Sea. Aside from boasting exceptional marine life encounters, this former transport vessel is renowned for its fascinating artifacts, such as army jeeps, tanks, and locomotives. Exploring the SS Thistlegorm is like diving within a piece of history, which is why countless divers visit every year to see what all the fuss is about.

A Brief History of the SS Thistlegorm

The SS Thistlegorm was constructed in 1940 by Joseph Thompson & Son in the dockyards of Sunderland, England. She was designed as an armed freighter, with a 4.7-inch anti-aircraft gun and a heavy-calibre machine gun fitted to the stern of the ship. After being launched, the SS Thistlegorm headed to the United States to collect steel rails and aircraft parts, then journeyed to Argentina for grain before cruising to the West Indies where she was loaded with rum.  Her final voyage began in Glasgow on 2 June 1941, with the vessel bound for Alexandria, Egypt. The SS Thistlegorm was stocked with Bedford trucks, Norton motorcycles, Wellington boots and Bren guns destined for Allied forces stationed in Egypt. In addition, there were steam locomotives, coal and water tenders that were intended for the Egyptian National Railways.

Sailing as part of a convoy, she stopped in Cape Town to refuel before heading up the East coast of Africa and into the Red Sea where she moored at Safe Anchorage F. It was here that she was bombed by the Luftwaffe on 6 October 1941, with four sailors and five members of the Royal Navy gun crew losing their lives in the attack. While most of the SS Thistlegorm’s cargo was sunk with the vessel, the steam locomotives were blow off the cargo deck to either side of the wreck.

The SS Thistegorm as a Dive Site

The wreck was discovered by Jacques Cousteau in the early 1950s using information shared by local fishermen. Photographs from this dive expedition (which included the recovery of several artifacts from the wreck) can be seen in the February 1956 edition of “National Geographic” magazine and read about in Cousteau’s book “The Living Sea”.

But it wasn’t until dive tourism began to flourish in the Red Sea during the early 1990s that recreational diving on the Thistlegorm began. At a maximum depth of around 100 feet/30 meters, the vessel is easily accessible for divers with an Advanced Open Water certification and can be penetrated because much of its midship structure was blown off.

Diving amidst bomber tailplanes, war-era trucks and armoured vehicles is an otherworldly experience, not to mention seeing locomotives surrounded by marine species. Tuna, barracuda and sea turtles are regularly encountered around the SS Thistlegorm wreck, together with moray eels, stonefish, and crocodile fish.

While you can dive the SS Thistlegorm on a day trip from Sharm El Sheikh, it’s best to visit as part of a dive liveaboard trip. Due to its popularity, it can get incredibly crowded, so the liveaboards tend to arrive early in the morning to avoid the masses. Night diving is also possible on the wreck during dive liveaboards if the conditions are right.