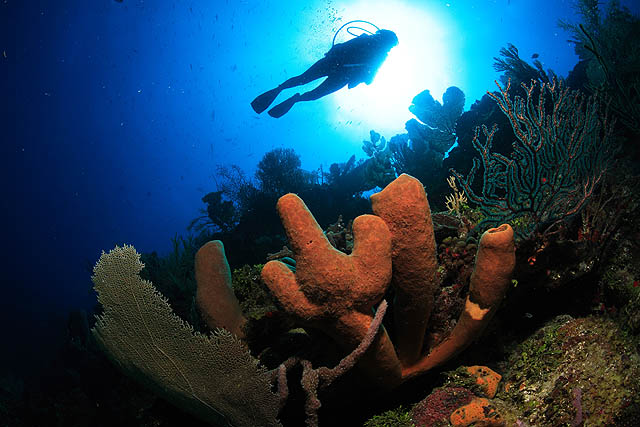 Positioned on either side of Roatan, Utila and Guanaja form part of Honduras’ majestic Bay of Islands. They’re a paradise for divers, with white sandy beaches lapped by the crystal clear waters of the Caribbean and the Mesoamerican Barrier Reef right on your doorstep. This reef is the largest of its kind in the Northern Hemisphere and boasts not only stunning coral reefs and colorful tropical fish but thrilling encounters with sea turtles, reef sharks, and whale sharks.

Utila features around 60 moored dive sites that offer something for everyone and is the best place to spot whale sharks that congregate around the banks of the island’s north end. Guanaja is a densely populated cay that’s been nicknamed the “Venice of Honduras” due to the canals that snake their way through Guanaja Town. It’s the least well-known of the three islands and remains blissfully authentic for divers
wanting a dose of local culture during their vacation.

If you’re interested in learning more about these two Honduran gems, read on to discover some fascinating facts about Utila and Guanaja.

• Utila is the smallest cay in the Bay of Islands and is home to around 4,000 people. Many are descendants of the Garifuna people who were sent to the islands by the English to prevent them from assisting the French in a dispute over the islands of Martinique and Saint Lucia.

• Unlike Utila and Roatan, which are clustered with tourist resorts, the primary source of income on Guanaja is fishing and shrimping. This means you’ll be treated to delicious seafood every night of the week!

• Archaeological evidence on the islands suggests they were inhabited as early as 600 AD by the Paya people whom Christopher Columbus believed to be cannibals. • Christopher Columbus arrived in Guanaja in 1502 after seeing a small fleet of dugout canoes traveling towards the mainland. It was also during this trip that he discovered cacao on the island, which is the main ingredient used to make chocolate.

• Utila hosts the annual Sunjam electronic music festival, which attracts world-class DJs and is one of the largest gatherings of its kind in Central America.

• Guanaja’s name has been changed multiple times throughout its history, with the island previously known as Caguamara, Isla Pinos, Guanaca and Bonaccao.

• There are less than 20 cars on the island of Utila, which has been described as the “Key West of 20 years ago” thanks to its pedestrian-friendly streets, lack of chain stores or fast-food businesses, and welcoming locals.

• One of the first scuba divers to explore and map the sites around Guanaja was Homer Hickam, a former NASA engineer who trained the first Japanese astronauts. His memoir “Rocket Boys” was the inspiration for the 1999 film “October Sky” and he still owns property on the northeast of the island.

• Utila is home to an endemic iguana known as Ctenosaura bakeri, a critically endangered species that inhabits the island’s brackish mangrove swamps. It was first described by Norwegian-born zoologist Leonhard Stejneger in 1901 and named after his friend, Frank Baker, who was the former director of  Washington, D.C.’s National Zoo.